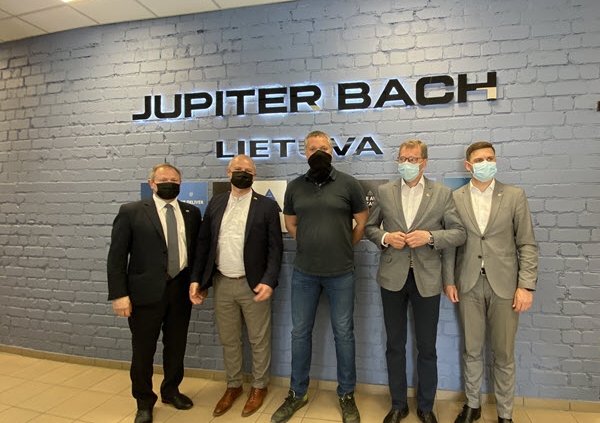 Tuesday 1st of June our Team in Taurage, Lithuania had the pleasure of welcoming the Minister of Environment in Lithuania, Mr. Simonas Gentvilas.

As part of the minister’s planned visit to Taurage City, the Minister among others visited Taurage’s largest companies which are active and focus on the green energy sector, as well as having focus on sustainability. Our site in Taurage is one of the largest employers in the city with close to 400 employees.

The purpose of the minister’s visit was to learn more about the products produced, the markets and the people behind . During the tour and meeting in Taurage our General Manager Irmantas Arlauskis also used the opportunity to raise a discussion about Lithuania Environment strategy, how it can support our activities and what challenges we have with waste management etc.
Besides 2 members from the parliament in Lithuania, the Mayor of Taurage City, Dovydas Kaminskas, also joined the visit. The Mayor of Taurage is also focusing on green energy and one of the latest initiatives from his office was the implementation of the first electrical busses in Taurage aiming to reduce the Co2 emission in the city. A great and important sustainable initiative in Taurage.

During the factory tour the visitors were introduced to our production methods and processes hereunder also our semi-automatic HSI production line.
Wind power in Lithuania is getting increasingly important and it’s supposed to add 1,65 GW and 0,7 GW of offshore capacity in the next 10 years in the country according to the latest Woodmac Market Outlook.

Read more about our devotion to wind here